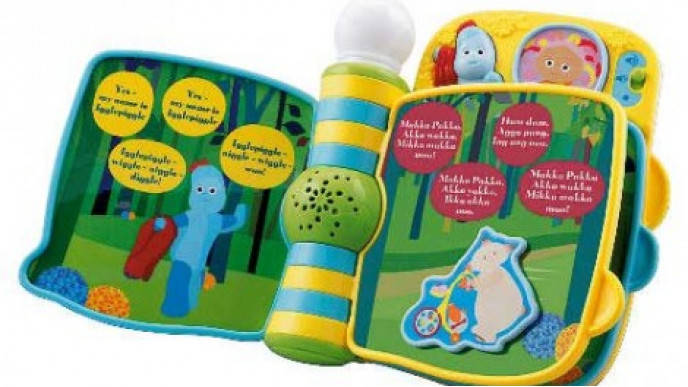 Tesco Direct are selling this Vtech In the Night Garden Sing and Slide nursery book for just less than half price, it's £8.00 instead of £16.97.

The In The Night Garden Vtech Sing and Slide nursery book is just the sort of thing young babies and toddlers love; it's fun, it has bells and whistles and lights and it's typical Vtech 'making learning fun' .

When they press the Upsy Daisy and Igglepiggle buttons your child will hear their sounds and songs and can watch the lights flash along in time.

Reviews from other people who already have this In The Night Garden Vtech Sing and Slide nursery book read like this...

"My grandson loves the In the Night Garden Vtech Nursery book which I bought him for christmas. It is very sturdy and also well made. It holds his attention for quite a long period of time as there are quite a few things to do on each page. The talking and singing voices are the same as the T.V program."

The one thing lots of people say is that it's quite heavy and little toes have been squashed when it's been dropped on them; something to consider if you're massively over protective perhaps.

Batteries are included and it's suitable for little ones aged 6 months or older.

Delivery costs almost as much as the book, so I'd click and collect in-store.