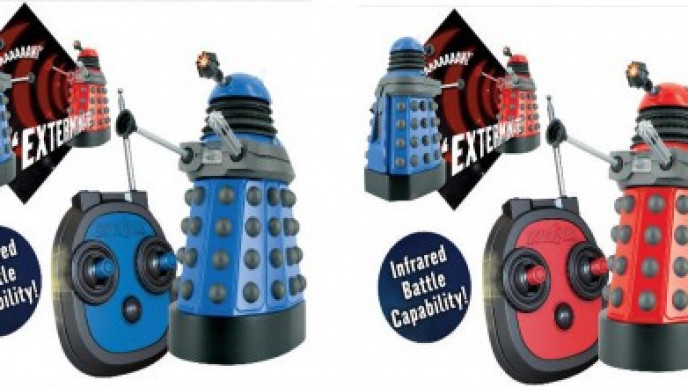 We've got one of these and I can recommend it. The remote controlled Doctor Who Dalek is a lot of fun. Right now Tesco has this reduced down in its clearance section to £6.97. It was originally priced instore for £19.97 (which is sadly about what I paid!). Right now the next cheapest it is on sale is at Toys R us for £14.97.

Standard next day delivery is £5, however you can collect the item for free instore. Not all stores have a collection service though.

My son has been mad about Dr Who since he was about two years old. He's loved watching all the episodes (although there's been a couple we haven't shown him, like the ones with the stone angels). Strangely enough it isn't the obvious stuff that really scared him or gave him bad dreams, but the stuff I wouldn't necessarily think of.

Like with the adipose babies - those little aliens made of globs of fat. He thought the Ms Foster character was their mother and when they were separated at the end with the babies leaving without her he was beside himself with grief! It took weeks for him to get past that one. Who knew?

His favourites on the show, apart from the Doctor, are the Daleks. I don't know what it is about these meglamaniac cyborgs but most little boys I know (and big ones) find them fascinating.

It has 360 movement control and a built-in infrared combat system that allows you to use two Daleks to battle against each other. Also a poseable gun and arm.

Each Dalek has its own frequency, the Red is 27MHz whilst the Blue is 40MHz, because of this, the two colours can interact and battle each other. But please note, Daleks of the same colour cannot battle as they use the same frequency.