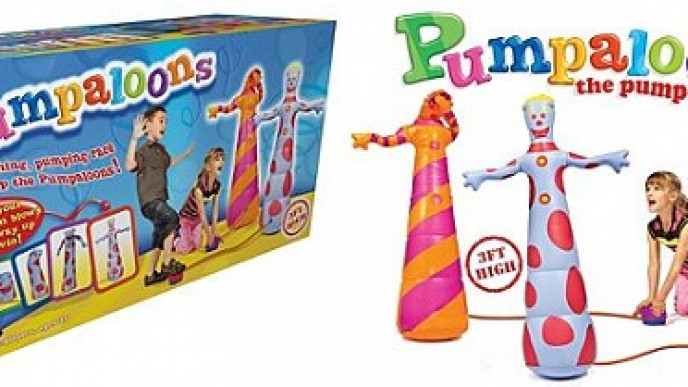 Pumpaloons. I've seen them advertised on TV. I've seen them in real life.  And I still don't get them. But still little ones seem to get them just fine, and I guess that's the point. The usual RRP for these is £19.99. Asda has had them on sale for £10, and now they're down to £7.50. Delivery is free if you can collect instore. Otherwise it is £2.95 for home delivery.

The game works like this. Two children race to pump up a pair of fun inflatable characters which bob and weave as they slowly rise up. The first Pumpaloon to sound its whistle wins. The game is recommended for ages four and upwards.

Sounds pretty simple, but even so most of the reviewers on the site give it a pretty high rating. These are typical of the comments. "Bought this as a fun game to play on Christmas Day with family, but couldn't wait and have had great fun so far with the kids." And this "Brilliant fun and hidden excercise game for kids and adults secretly..."

Not everyone was thrilled with the game. This is a comment on the game found on another site. "Bought this game for my 7 year old grandson for xmas - he and his little brother were quickly bored with the game. Could easily be played with ordinary balloons. Characters didn't even stand up unaided."