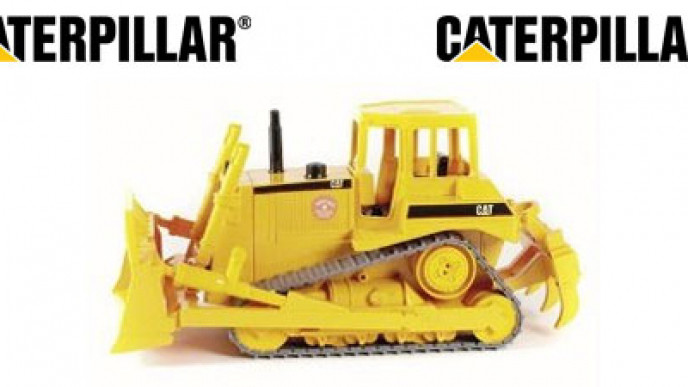 It's the end of an era in my household.  It would seem, for my youngest, that Lego and Wii Sports Resort now have precedence over dump trucks, JCBs and other things similar to this Caterpillar bulldozer.

On the one hand my bank balance and his dad are heaving a sigh of relief (they were seriously running out of digger machine storage) but on the other it's SAD, he's been able to say Joseph Cyril Bamford since he was two and can identify various models of JCB diggers from 100 paces...and now that could all be over.

However, I'm free to tell you all about this Caterpillar bulldozer without fear of hearing, "OHHH!!! I L O V E that! Can I have one?"

I was going to say it doesn't do anything, which is true but not true at the same time; it doesn't require any batteries as it doesn't have flashing lights or make 'realistic' beeping noises (although you can connect it to a the Light and Sound Module, but  you'll have to buy that seperately) it does, however have moveable parts.

The driver's cab tips forward so you can see the engine and the mirror of the driver's cab can be folded out. The low loader trailer has a fully functional fifth wheel clutch and folding support legs that ensure stability.

The loading ramps can be folded down and the vehicle locking device for securing the loaded vehicle can be adjusted.   The Caterpillar bulldozer has a fully functional front loader and the backhoe moves up and down and swings from side to side and the soft rubber tires have real tread; awesome.