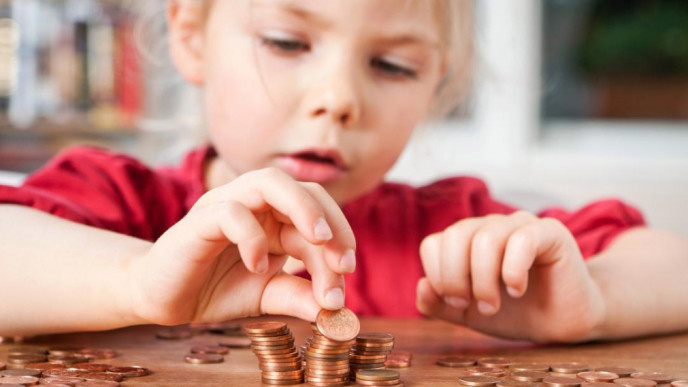 Money is an endless source of fascination to most kids, and many parents end up letting little ones play with their purse or wallet now and again, even if only to buy some peace when you're otherwise engaged.

But according to a new study, allowing your child to even touch cash, never mind play with it - could make them less helpful and more self-centred.

Yes, you read that correctly. Playing with money even for a short period of time can, it seems, make a child more selfish.

In another experiment, children aged between three and six years old in the USA were asked to help tidy a classroom and then given a box of money to play with, before moving to another room where they were asked if they wanted to give their toys to children at another school, and told that doing so would make them happy.

The kids who played for longer periods of time with the money were less willing to help with the crayons, less helpful in tidying the classroom, and less likely to give away their toys to other children.

Now maybe I'm an old cynic but I found this study a bit bizarre. I can only judge it on the strength of my own experience as a parent but I can't see that allowing my children to play with money has done them any harm; I certainly don't buy the notion that money has some mysterious properties that render them selfish just by touching it. That's absurd, no?

Isn't it more likely is that some kids are less helpful than others, and that the length of time spent playing with money is coincidental? At three years old I can't imagine that many children have a very developed sense of what money even really is, so the idea that playing with it can somehow affect their inclination to be kind of helpful seems dubious to me.

Indeed, my nearly-three-year-old daughter is arguably the most helpful of each of my three children. Granted, she's still of an age where she wants to please the people around her and loves nothing more than doing anything to help, but she'll happily put her toys away, tidy away her shoes and even help wash the dishes.

And yes, she plays with money. In fact, I think allowing her to play with money has done her good. It's given her an appreciation of the value of money so she understands that having a pound to spend in the toy shop means that she CAN buy a comic but she CAN'T buy a new doll. And playing with money has even helped her get good at sharing.

So I certainly won't be banning my child from touching my purse any time soon. Will you?

We'll be discussing this story live on the radio tomorrow, so we'd love to hear what Playpennies readers think! Do you agree that exposure to money at a young age, even through play, has the power to change how selfish or helpful your child is? Or do you think there's no harm in letting kids play with cash? To take part in the debate, leave us a comment below or join the conversation over on our Facebook page.