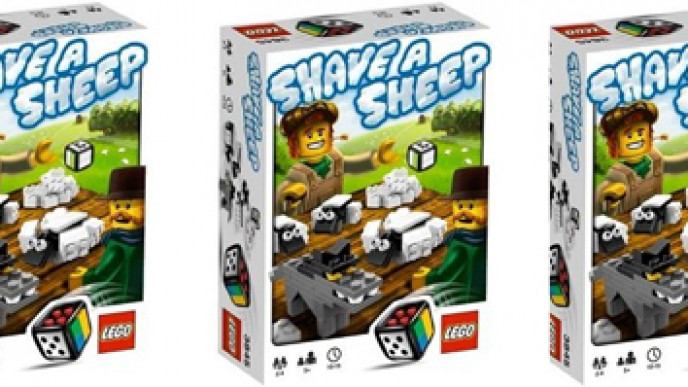 It's amazing we're not all flat broke here at PlayPennies - we all come across so many things where we think, "Ooooh that looks cool," or, "I bet that's fun!" it's incredibly difficult not to just add everything to one enormous online shopping basket!

Okay, so first of all you have to build your LEGO sheep and the dice then, you PLAY!  The object of the game is to collect as much wool as you can either by growing it, swapping it or scaring it off your opponents' sheep using the big bad wolf - something like that anyway!

And if you were thinking this was just a game for kids, THINK AGAIN; it would seem there are legions of adults playing LEGO Shave a Seep after dinner at parties.  Reviews from children and adults alike aren't helping my resolve NOT to spend any money on PlayPennies deals I come across today...

"I got this game, as I thought it looks fun and have a great name. And when you get these lamb out, they're so cool, I played it with my family (34,33 and 1) and I have to say even one year old daughter had fun throwing dice. Great fun overall and would recommend it even just to a group of adults to play, on their dinner party or similar. "

"Bought this for my five year old girl for Christmas. We played it all day, in fact the adults had every bit as much fun as the children."

"First impressions are rather negative - until you start to play. You have to be totally competitive for the game to be at its best. This is addictive. Playing against people who grow unaccountably attached to 'their' sheep adds a whole new level."

Rubbish, I've just added it to my Amazon basket - I'm so weak when it comes to LEGO and being competitive *sigh*