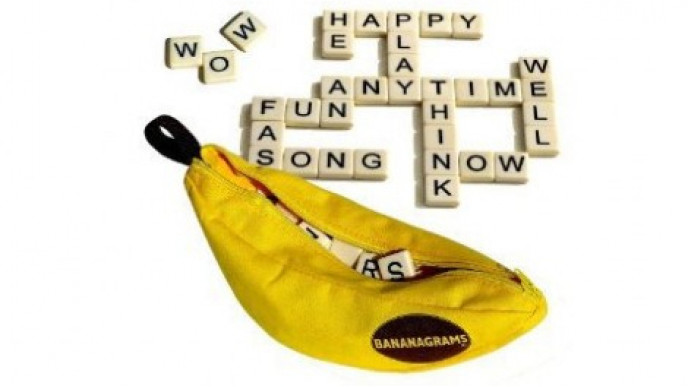 Amazon are currently selling this Bananagrams Word Game game for £6.49 instead of £9.33.

This Bananagram game looks like a lot of fun and although the Easter holidays are almost over, the summer ones will be here before we know it and the kids will need things to do and play.

There are 144 letter tiles which are contained in a rather amusing banana skin.  You don’t need a board, just a flat surface to play on which makes it easy to take out and about with you.

You can play with between two and eight players and each player takes a certain number of tiles. They are placed face down until someone shouts ‘SPLIT!’ Everyone turns their tiles over and has to make connecting words with their letters (think of everyone playing Scrabble on their own with their letters).

Then someone shouts ‘PEEL!’ and everyone has to take another letter from the banana and add it to their words. You can rearrange your words and letters as often as you like to accomodate the new letters and the person who uses all their letters first must shout ‘BANANA!’ and they win.

The age recommendation for this game is seven years onwards, well I think that's a little conservative to be honest, I started playing Scrabble – which Banagrams is very similar too – when I was about five, I used to play it with my grandparents and I learned LOTS!

Games like this are a great way to increase word skills, letter recognition and will certainly help to pass school holiday time.