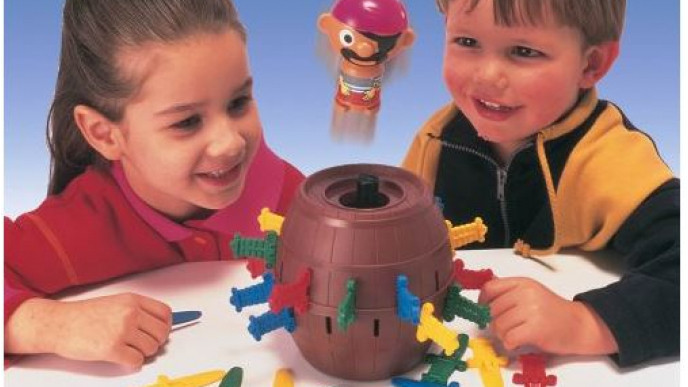 The Tomy Pop-Up Pirate is currently £7 at Amazon, but it's one of those annoying things where the price goes up and down, and before you know it could be up to £12.99 again. This is the cheapest it's been in almost three year though, so get it while it's hot.

This game has really great reviews, and plenty of them. Parents bought this for their children, and the whole family ends up playing together, which I think is a great result from an under £10 toy.

To set the game up, you'll need to add stickers to decorate the barrel and base, but it's pretty minimal.

When you're ready to play, you press the pirate down, and he locks into the barrel in such a way as to randomly pop out when a sword is pushed in, but no one knows which sword it will be that does it.

"Players select a set of swords of their favourite colour and take it in turns to choose a slot, hoping that they won't be the one to make the pirate pop up with a start. Once the pirate has been popped, the remaining players take out their swords and start to play again until only the winner is left. Every time you push the pirate back into the barrel, the hole which will make the him pop up changes, making Pop-Up Pirate a tense and exciting game in which you never know who is going to be the one to launch the pirate into space."

Suitable for 2 to 4 players, 4 years and over, and requiring no batteries, you can't really go wrong.