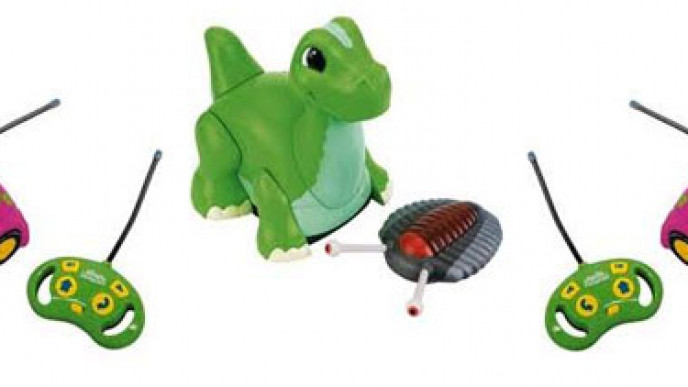 The car has  forward and reverse 'gears', features working headlights, makes engine sounds and plays (and I quote) "funky music you can sing along to as you play!"  Existing owners have nothing but praise for the Chad Valley: My First Remote Control Car, and all sound something like this...

"Cool little car, sound effects, playing music and the simplest of controls," and this, "Daughter loves it and often puts her Sylvanian family rabbits in it for a ride around the kitchen! Great to have a remote control car for a girl for a change!"

The Chad Valley: My First Remote Control Dinosaur is just as popular; he moves his head, tail and legs and spins on the spot when he's not moving a specified direction.

"This dinosaur took my 3 year old godson a little while to figure out as when you aren't pressing the "go" button it spins on the spot, which is actually pretty ingenious as you just wait until it is facing the direction you want it to go then press the fabulous bug shaped control. But he soon got the hang of it and was running everything over. Great fun!!"

You'll need six AA batteries for the car and only five for the dinosaur and they aren't included with either; stingy!