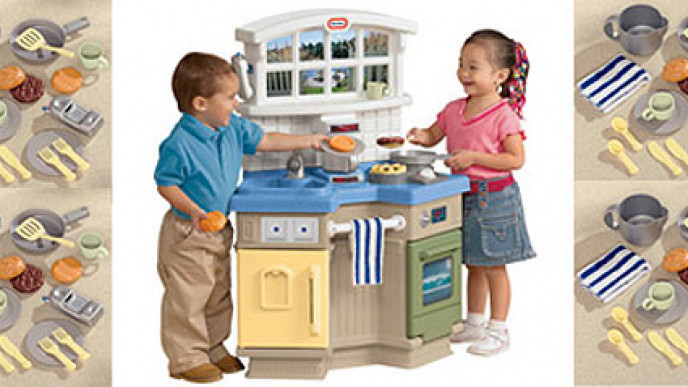 The Great British Bake Off reality TV series has taken the country by storm - even my grown-up nephew watches it, and he's pretty hardcore! - so if you have a young wannabe cake baker at home, then this Little Tikes Side by Side kitchen is going to make them very happy indeed.

Or perhaps they're an aspiring Gordon Ramsey!

On second thoughts, maybe not Gordon - let's go instead for the next Jamie Oliver or Nigella, they're much better role models than Gordon F-word Ramsey.

What fun it would be if, on the opening of their first Michelin starred restaurant, they were asked by the great and the good of the the culinary media, "What was it that first inspired you to become a chef?"

"Well it all started one Christmas when I was given a Little Tikes Side by Side kitchen!"

This kitchen won't be on such a grand scale as their restaurant one - it fits neatly into the corner and has an oven, sink, fridge, faux granite countertop and comes with lots of accessories.

It's suitable for wannabe chefs aged three and over and makes realistic electronic kitchen noises too.

Standard delivery, if you don't want to collect your Little Tikes Side by Side kitchen for free, is £4.95.