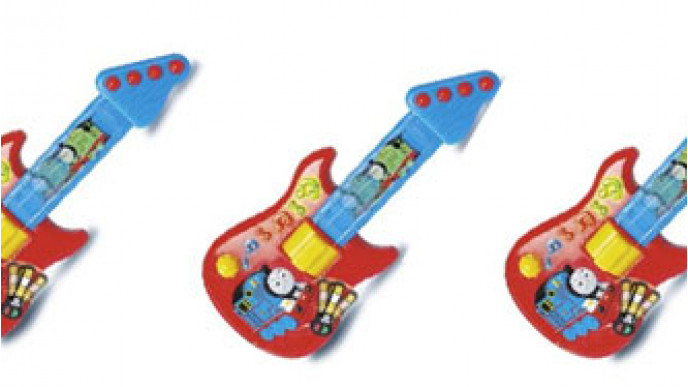 My youngest loves to play Guitar Hero on the Wii and now that he's almost five he's pretty good, but when he was two he found the whole process of rocking out a bit tricky - the guitar was too big but he wanted to play like everyone else.

He would have loved this Thomas Rock and Roll guitar and would have been able to jam alongside the teenagers to the dulcit tones of Santana, Eric Clapton and Rage Against The Machine et al.

The Thomas Rock and Roll guitar is everything you can expect from Tomy – bright, chunky and sturdy so it should withstand even the most outrageous of rock star antics.

It plays six different tunes and has two different play modes; there are, of course, the obligatory flashing lights and there’s even a whammy bar so your little rock god can REALLY be a guitar hero.

It's suitable for young musicians aged 18 months or older, although some reviewers have given them to kiddies younger than this and they've adored it...

"I bought this one for a friends little boy (6 months) as my son was given one when he was just a little older and it was firm favourite for a long time. They are robust and ours has survived my daughter too. My friend's little one also loves this one and loves playing with it."

The 3AA batteries required to power up the Thomas Rock and Roll guitar are included and there's no delivery to pay if you choose the SuperSaver delivery option.