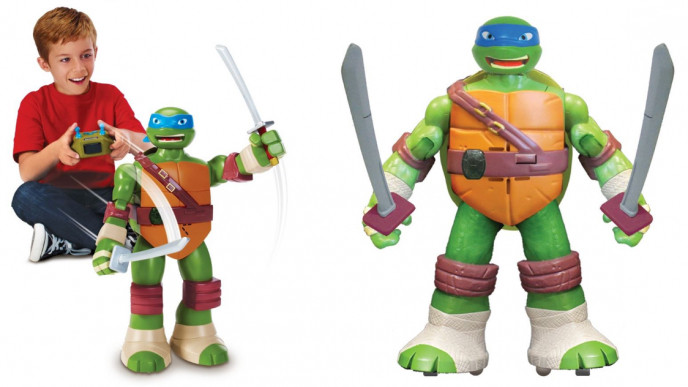 This is a mega bargain for turtles fans, as Smyths Toys are selling this Teenage Mutant Ninja Turtles Giant Ninja Remote Controlled Leonardo for just £29.99! This is still selling for £70 in Debenhams so it's a brilliant price for this awesome toy.

This is a large remote controlled Leonardo figure, standing 34cm tall, and you control his moves with the using the easy-to-use remote control. Leonardo features non-stop katana-crushing and Ninja spinning actions and has 3 pre-programmed battle moves - 'sliced and shredded', 'katana crackdown' and 'bot-bashing blade of justice'.

He also includes over 40 phrases and sound effects such as "katana crackdown", "it's Shredder... Get him!", "360 degrees of Turtle Power" and "where do you think you are going?".

I think there's a slight mistake on the Smyths website as it's listing the previous price as £30, and a penny discount isn't worth shouting about, but as the RRP is £69.99 I think less than half price is a bargain.

Home delivery is free, or you can opt for free clikc and collect if that's more convenient for you.

SMYTHS DISCOUNT CODE: Day of Play Sale: Over 20% off Sony games and accessories