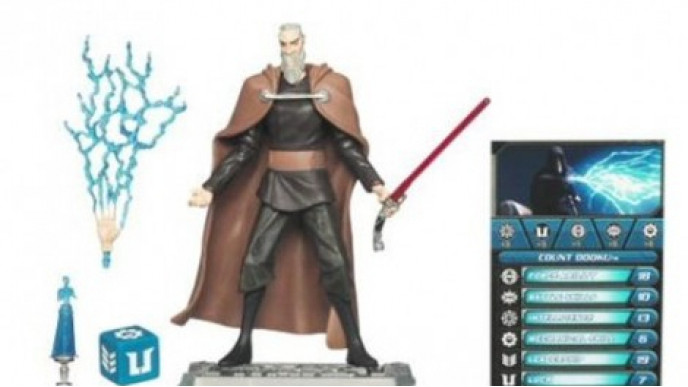 Specifically, this is a Star Wars: The Clone Wars: 3.75 Inch Count Dooku Action Figure (Wave 4). I'm sure they could have come up with a longer name for the toy if they'd really thought about it. Play has this on half price sale right now, down from £8.99 to £4.99.

You can also get another baddie figure from Star Wars: The Clone Wars for £4.99. That's the Cad Bane Action Figure.

Star Wars stuff is particularly expensive I've found. Everything seems to be aimed at adults, who perhaps collect these sorts of things. Which seems to forget that there's still a huge audience of little kids out there who love this cartoon series and want to play out stories of their own.

Now I'm not an expert on Star Wars: The Clone Wars. My son likes to watch the show on the Cartoon Network, and it is one of the few shows that doesn't drive me completely nuts. If you've ever seen the Cartoon Network you'll know there's some really weird stuff on there!

Being the Easter Holidays, he's been allowed to watch more TV than usual. Although there's not been any need to take up this option with the lovely weather we've had.

The Count Dooku figure comes with accessories, and a 'value added battle card', also described as a trading card.