With moving ears, lights, sounds and songs
By Lisa Hayes, 1 year ago 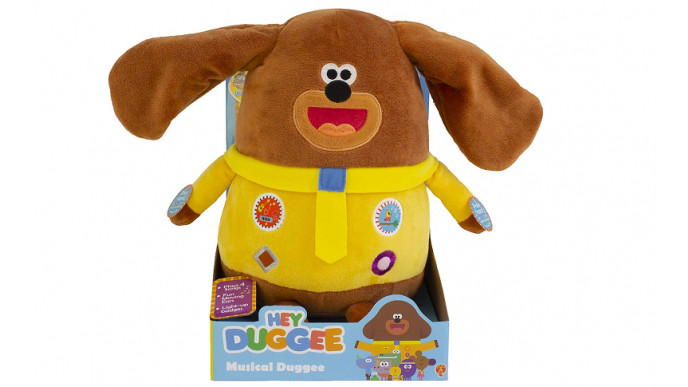 Hey Duggee is officially the best show on CBeebies** and this new toy is going to be a big hit with fans of all ages. There's a new Hey Duggee Musical Duggee soft toy being released at the end of this month, and Amazon have it on pre-order now so you can make sure your little Squirrel gets one.

This toy is not just a cuddly Duggee (though that would be wonderful anyway), but it has loads of extra features for kids to play with. It includes sounds and songs from the show, and Duggee's ears move in time to the music!

You just press his hand to activate three different tunes from Hey Duggee, and his ears move to the beat of each song. Press Duggee's other hand to hear fun phrases and sounds from the show as well as the iconic theme tune. His four badges also light up in red, orange and green, and they flash in time with the music as it plays.

This is a pre-order at Amazon, priced at £31.99 with free delivery, due for release on 31st May 2019. It also has a pre-order price guarantee so that if the price drops before release you pay the lowest price, not the price listed now.

We'll be keeping an eye out for any special offers on Hey Duggee Musical Duggee, and we'll let you know of any price drops.