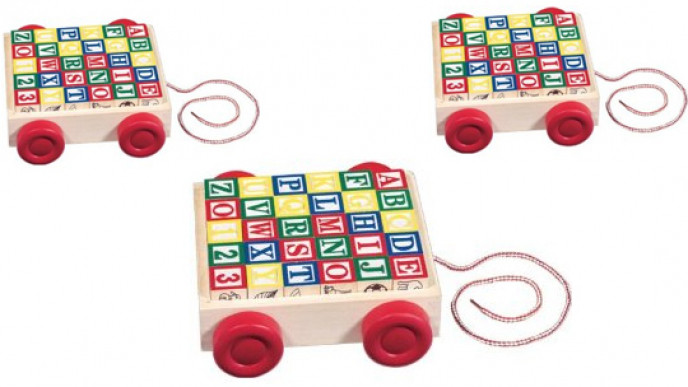 I'd pay full price, and then some, for this classic Melissa and Doug ABC building block cart - it's the sort of traditional, wooden children's toy that makes my heart jump for joy; Amazon are currently selling it for £9.38 rather than £12.99.

If I had a child young enough to appreciate this Melissa and Doug ABC building block cart it would already be in my basket, paid for and on its way to my house ASAP.

When my youngest was little, me and his dad went off in search for an ABC building block cart and were stunned as to how expensive they were and not that interesting.

The one we got in the end was basic and did the job but was nowhere near as lovely as this Melissa and Doug ABC building block cart!  It has 30 wooden blocks each featuring letters, numbers and pictures and all fit neatly into their little pull-along cart.

You can line them up in order, stack them, sort them into little groups and EVEN...just pull them all around for kicks (radical, I know!).  It doesn't take any batteries, it doesn't make any noises or have any flashing lights - it's a proper piece of traditional toy heaven.