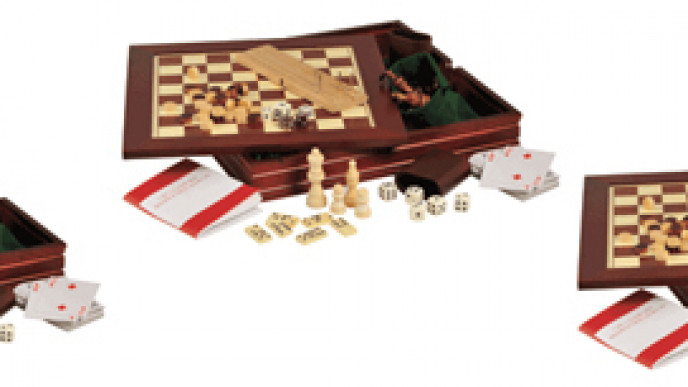 The Reader's Digest aren't just about books, grand prize draws that I've never won and those funny little magazine-books that are always available to read in hospital or GP waiting rooms!  They sell other things too, like this rather fabulous 7-in-1 wooden games set for £6.99 rather than its original £34.99.

I've ordered this 7-in-1 wooden games set from the Reader's Digest because I'm a rather big fan of traditional board games.  I learned to play draughts, backgammon and chess when I was small - we used to play for Smarties, the winner always got five of them - and I played dominoes with my granddad every Saturday afternoon before he fell asleep in front of the TV whilst Big Daddy wrestled with Giant Haystacks; such lovely memories.

All the pieces and decks of cards that make up this 7-in-1 wooden games set come self contained in a lovely wooden box - the lid slides out and when turned over reveals the chess and draughts board and the box itself is the backgammon 'arena' (is there a proper name for that?  It's always been the backgammon arena to me).

There's also an instruction and getting started booklet that will explain how to play all the games: cribbage, draughts, dominoes, chess, back gammon, aces and various card games.