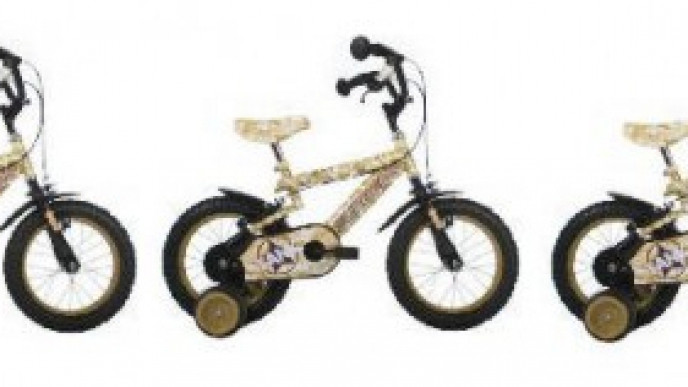 Tesco Direct are selling this Sunbeam 14" boys bike for less than half price - it was originally a staggering £130 but has been reduced to, a slightly less painful, £52.

Being VERY excited about a new bike is, I think, one of those universal laws.  It doesn' t matter how old you are or where you live in the world, getting a new bike is VERY cool.

The Teenagers' birthdays are both in November and even though the new bike excitement was off the scale, having to dress up like Scott of the Antarctic wasn't so much fun.

My youngest's birthday is July, a much more civilised month to be playing outside on your birthday present bike!

This Sunbeam bike has a very macho tank/camouflage design and has a tough 10" steel mini mountain bike style frame and a comfort padded saddle. It has 14" spoked wheels with stabilisers and a colour matching handlebar pad.

The Sunbeam "Tank" also comes with front and rear fitted mudguards and brakes and has an inside leg measurement of 40-51cm.

It's suitable for little cyclists aged three years or over.