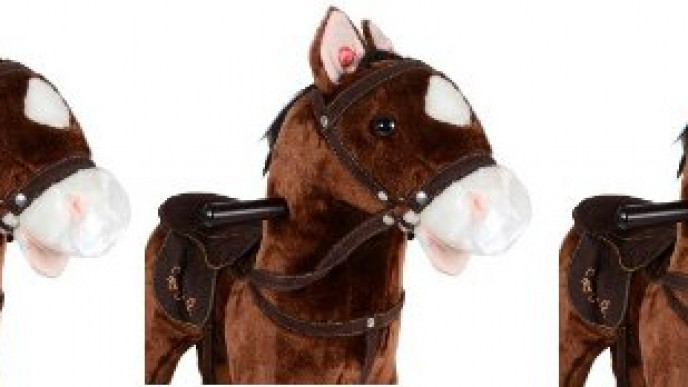 I love anything to do with horses, they're my sanctuary away from everything that's not nice.  When I was little I went to a little nursery school and they had two rocking horses, a brown rocking horse and a much larger white one (at least he was in my memory, if he was still there today I'd probably be shocked to discover that he wasn't 16hh).

The thing that amazes me, as a grown up, is just how expensive rocking horses are!  You can spend thousands and thousands on a beautiful rocking horse - I'd be rather reluctant to let the kids play on it for that sort of money though.

Rejoice, then, that this brown rocking horse is only thousands of pence rather than pounds - he's rather cute looking too and suitable for little pony fans aged three years and over.

He makes realistic (allegedly) pony sounds and moves his mouth when you press his ears and has a soft padded saddle for riding comfort too. Personally, I wish he didn't have silly sound effects, but then I'm a bit of a purest and prefer to listen to the real thing.

Shipping is free, so £38.99 is all you're going to pay for your little brown rocking horse.