'Happy Girls Are The Prettiest' - Would You Put Your Daughter In This Next Top? 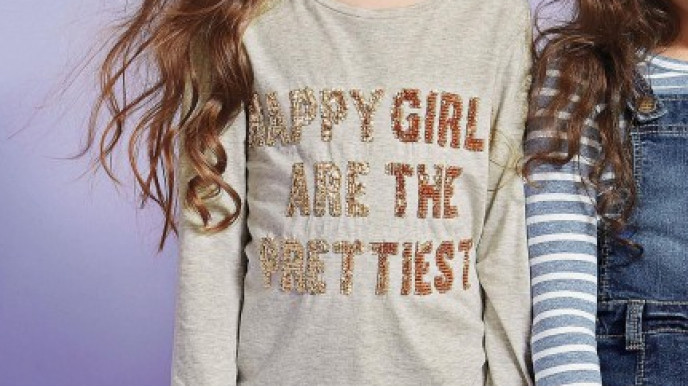 A mental health charity has criticised Next for selling a t-shirt for girls which bears the slogan 'Happy girls are the prettiest'.

Next has come under fire for selling a long-sleeved T-shirt proclaiming ‘Happy girls are the prettiest’, targeted at girls aged between three and 16.

I'm no fan of slogan clothing for kids at the best of times - as the mum of both sons and daughters, I'm bored of the predictable, sexist, gender-stereotypical nonsense that adorns t-shirts, tops and - worst of all - baby clothes. And while I see the sentiment behind this top and the fact that, presumably, its designers were going for an inspirational message rather than the bog-standard beauty aesthetic rubbish that many retailers splash across tops for girls, I still think this misses the mark.

I'm not sure I agree that this slogan puts pressure on girls and young adults with mental health issues, however. My issue with the top is a more general disappointment that in 2015 we're still wheeling out clothes for kids with slogans that we should have outgrown by now. The world has moved on, and its time kids' clothing retailers caught up with that.

And can you imagine a top for boys that said 'Happy boys are the most handsome'? How dispiriting that we're emblazoning tops for girls with slogans that prioritise prettiness as the ultimate prize.

"So sorry for any offense caused, we are working on making our ranges as inclusive as possible and avoiding gender stereotyping. We will definitely feed your concerns about this particular style back to the teams."

Good on Next for responding swiftly, and let's hope this inspires their design team to come up with some gender-neutral tops that kids can wear with pride.

What's your view on this story? Do you think 'happy girls are the prettiest' is an inappropriate slogan for a top for girls aged between three and 16 years old? Or would you happily put your daughter in this top? Come and join the debate over on our Facebook page.