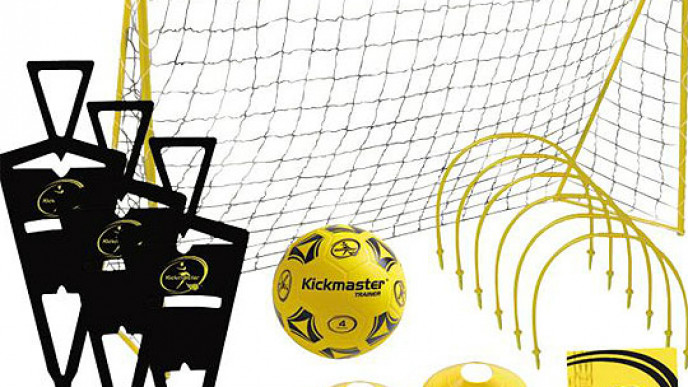 Argos are selling this Kickmaster Ultimate Football Challenge for £19.79, rather than its full £29.99 price.

My youngest son has been going to football practice at the local football club, on Saturday mornings, for almost a year now and can't wait for the summer holidays to be over - he's been selected to play for the Under 7s team next season and is excited beyond belief!

Football training is now a very serious business, and now the summer has FINALLY decided to put in an appearance (fingers crossed it's here to stay for more than a week!) lots of practice sessions will be held in the little pocket park just a few paces away from home.

There are goal posts already there but sticks and tupperware tubs, stolen from the kitchen, are more than a bit rubbish as dribbling markers.

I was going to buy Edward something very similar a few months ago but it went out of stock.  This, however, turned out to be a good thing as this Kickmaster Ultimate Football Challenge set has more to it than the other one.

It comes with lots off footy bits and pieces:

The Kickmaster Ultimate Football Challenge set is available for both in-store collection, which is free, or home delivery which will cost you £5.95.