Use LEGO bricks and an interactive Mario figure to build a real life game
By Lisa Hayes, 1 year ago 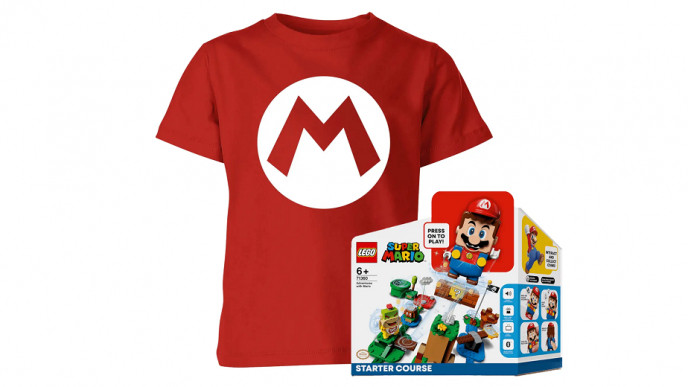 Love LEGO? Love Super Mario? This is the best price yet for the LEGO Super Mario Starter Course, as you can get the course plus a Mario T-shirt in a bundle for only £32.99 at Zavvi! The LEGO set itself is selling for the full £49.99 at LEGO Shop, and this deal undercuts even Amazon's £33.30 deal - plus you get that Mario t-shirt too!

The t-shirt is a child's one, and you can choose from sizes between 3 and 12 years. There's a £1.99 delivery charge, with Red Carpet members benefiting from free delivery.

What is LEGO Super Mario?

Neither a video game or just traditional bricks, the new LEGO Super Mario features an interactive Mario figure that can collect coins in real-life game levels that you build with the interactive LEGO bricks.

It's a brilliant merger of the bricks and gaming worlds, as kids can build courses for Mario to run, walk, jump and complete puzzles and obstacles, all while his little display and sounds react to his environment.

He makes different sounds when you make him jump, stand on lava bricks, defeat a Goomba and loads more. My kids (and myself!) have had loads of fun playing with this course, and the fact that you can now get so many expansion sets, characters and new levels means you can build your game even bigger! We just got a load more sets in the range for his birthday, and it's been fantastic building new levels and making a huge interactive game. I definitely recommend this set - there's nothing quite like it!