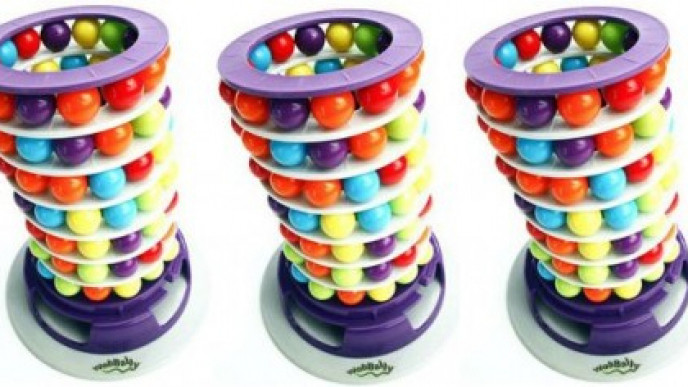 This WobBally game looks like a lot of FUN and Amazon are currently selling it for £5.57 instead of £14.99.

Writing deals from Amazon at the moment is a bit like playing Russian Roulette; but instead of not knowing where in the barrel of the gun the bullet is, you just never know when, or if they're going to put the price back up.

However, this WobBally game looks likely to provide a fair few hours of family fun, a lot of giggles with just a dash of adrenalin thrown in for good measure, so I'm going to take my Amazon chanced and tell you about it.

The simplest way to describe WobBally is to say it's like Jenga but with balls...sort of.

It's a game of skill and patience for between 1 and 6 players; you MUST make sure you don't collapse the tower of balls and there are three different versions of play.

All versions start by placing the WobBally tower on a firm hard surface. The tower contains a ball-bearing, self-levelling device and once the tower is centered the clear outer cover on the tower can be removed and play can begin.

Each player must take turns in tapping the balls into the tower one by one and the one who causes the tower to collapse is out of the game; my youngest will love this game, he enjoys games that have a bit of 'mild peril' about them.