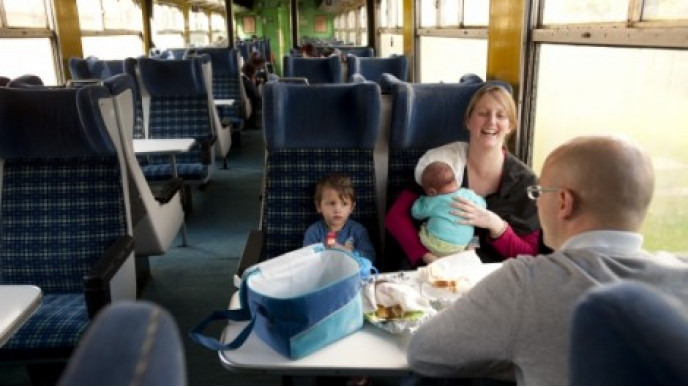 This coming weekend I have a 'free pass'. A whole weekend off with girlfriends, just on my own, at the British seaside. My son's not too thrilled to be left out of what he imagines will be non-stop buckets and sandcastles. But I'm pretty happy to be getting to sleep a whole night without being kicked by little feet.

I've been researching the best ways to get the cheapest possible train tickets. Here's what I found. Hopefully it will be of some help to others! And please, do pass on your own tips. I'd love to hear them.

Don't use travel sites like The Train Line. Go direct to the website for the train operator. You'll get cheaper tickets there, with discounts available that you won't find elsewhere, and fewer charges. What you could use a travel site for is finding out which train operator(s) cover your destination.

Here's something I only found out while hunting down train ticket bargains. Train operators are also obliged to sell tickets for the services of other companies too.

If you use National Rail's website, you'll be taken directly to the relevant operator's website when you click to buy a fare. I've found that sometimes this gives me a cheaper fare than I would get if I searched directly on the operator's website, and at other times it's the other way around. So, as much as it is a pain, do both searches.

National Rail also lists all special offers on its website, which is well worth checking out. Click here.

If you need to call National Railway Enquiries, use 020 7068 0519 instead of paying for the national rate number. When you're using the website, tick the box next to 'Include slower trains' for cheaper fares. It is in the Plan Your Journey box.

Have a look for tickets on the lines that carry open access train operators. There's only a few in the UK - you can find a list here.

As mentioned above, looking for slower routes is one option. For example, Midland Mainline operate out of St Pancras, and run slower but cheaper services on similar routes to Virgin, which operates out of Kings Cross.

This is something I'm a pretty old hand at, having had to find the cheapest routes from London to the East Midlands twice a month for a couple of years. I've found it applies on most other routes as well.

It's one reason why I always do my first search for train tickets using National Rail's site, as you can flick through the 'Details' on each and soon get a good idea of the operators who run services to particular destinations.

But, the next bit is something completely new that I only found out researching this blog post. You can also try mixing up parts of your route, especially if it is a long journey.

For example, if part of your trip is during peak hour, you can buy a ticket for that portion of the trip and keeping it to the shortest part of the trip. Then buy another ticket for the longer, off peak part.

There are a number of railcards available nationally that will provide a discount on train services. A Family & Friends Railcard for example will give you one third off adult off peak tickets, and up to 60% off children's. Tip: there's usually a sale on this at the start of the year, well worth keeping an eye out for.

As well as the more well known national railcards, there are also regional ones. These also give a third off tickets. Check on your regional travel website, or with your local train operators, to find out what's available.

Use Oyster in London

If you don't already live in London or near enough for a day trip, you'll probably venture into London at least once with the kids. An Oyster card can be worth investing in.

You can use an Oyster card on buses, the Underground, the new Overground services, trams and train services in South London as well as a few in the North.

Interestingly, I just found out that the Oyster card will count a journey as a single trip if you change between modes of transport at a designated out of station interchange. For example, between the underground station Embankment and the rail station Charing Cross. There's a list of these interchanges here at the Oyster and Rail website.

This is an unofficial website, but a pretty useful one. It's thorough, and it turns out that Oyster Cards are a bit more complicated than I realised!

For other areas there's Rangers and Rovers. I hadn't heard of these before either. I really must learn more about public transport around the UK! You'll find a list of these on the National Rail website here.

These can be quite handy if you're going somewhere for a short break, as they give you the option of doing a number of train journeys locally over a set period of time.

Here's a few random things I found out. You can have fares for the UK at your fingertips with a CD. It costs about a tenner, and you can find it here.

PlusBus is an option you'll get when you buy tickets from a train operator's website. Where it is available, you'll get unlimited bus travel at your destination. You'll need to compare it to local fares to make sure it works out cheaper.

Advance tickets are the cheapest. This is where you book a specific train time. It turns out that train companies release these in batches. National Rail (I'm beginning to really like this site) lists the dates furthest ahead that you can book advance tickets for each operator. Click here.

At the moment this goes to July and August, so if you're taking a summer break in the UK you might want to book tickets sharpish. These are the cheapest tickets, so they go the quickest.