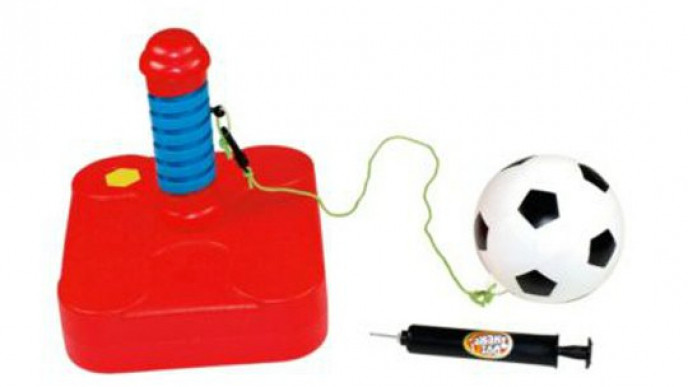 Tesco are selling off a whole bunch of outdoor toys at better than half-price prices – I guess they’ve given up on summer too.

The Swing Soccer Set was £8.70 and is now reduced to £3.91. You can have it delivered for £3 or click and delivery to your local store.

These things always make me think of my younger brother who had the misfortune of growing up with two sisters quite a bit older than himself. One of these would have been great for him, because at least he would have been able to play on his own, rather than walking around from sister to sister asking us to play with him – poor boy! It makes me feel quite guilty in retrospect!

The good thing about these is that kids can play on their own or with others, and in the small gardens most of us seem to have – if you’re lucky enough to have one at all – you’re not going to break any windows or lose the ball in the grumpy neighbour’s garden.

The swing soccer set comes with a red plastic base that can be filled up with either water or sand for stability. Attached to the base is a long cord with a black and white football at the other end. This multi-surface soccer training set arrives fully assembled and includes a pump.