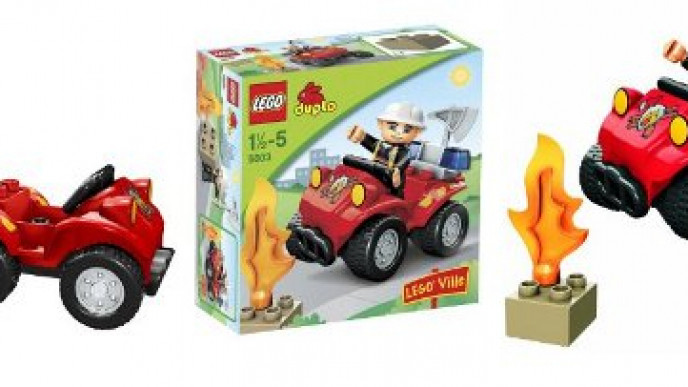 This rather cute and chunky LEGO Duplo LEGOVille Fire Chief set has been reduced by Amazon a little bit, for the time being (we know what they're like) - it's  £5.79 instead of £7.99.

I know it's only a little bit and I know it's been cheaper, but I think he's rather lovely and is one of those rare things I'd actually be quite happy to pay full price for.

LEGO Duplo is LEGO for little kids who aren't quite ready for 'grown-up' LEGO - it's big, it's chunky and the pieces are too big to be swallowed.

This LEGO Duplo LEGOVille Fire Chief is an awesome little guy with his own fire rescue quad bike (complete with emergency axe on the back) just ready and waiting to come to the imaginative fire rescue - whether an imaginary cat is stuck up and imaginary tree, or there's a huge fire disaster in the neighbourhood he'll be ready for action and will, I'm sure, save the day.

Our LEGO Duplo LEGOVille Fire Chief is rather a cool fire chief - a fire truck isn't for him, OH NO, he rides a quad bike that has his own emergency axe on the back.

There are only seven pieces to this little LEGO Duplo LEGOVille Fire Chief set, which makes it perfect for young fingers that are 18 months or older because they'll be able to put it together and play with it before they get frustrated and bored.

Thanks to fuzzybear78 at HUKD