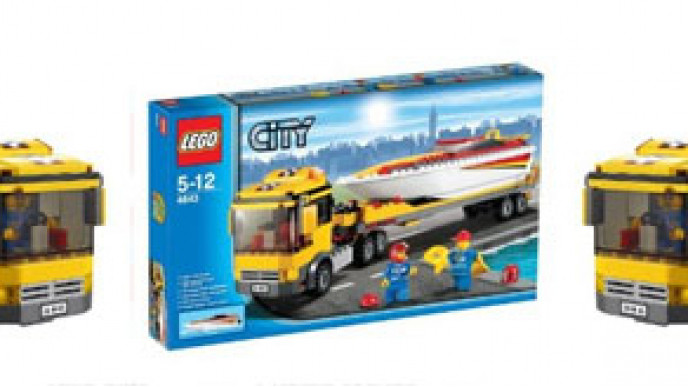 If you're on the prowl for something LEGO City that won't break the New Year bank, take a look at this LEGO City Power Boat Transporter set - the normal price is £29.99 but Amazon will let you have it (for now) for £16.99, not quite half price but close enough!

I'm getting rather sucked into the whole LEGO City world and could, if I was so inclined, become a bit of an adult collector - there are so many great sets to collect and once you start I can imagine it would be almost impossible to stop.

"Just one more thing! A LEGO City Power Boat Transporter would really make my city much better, I'll just get that and then I'll stop..." I can hear it now.

The LEGO City Power Boat Transporter comes with two mini figures - a truck driver and a sailor, although he looks more like a power boat mechanic than a Royal Navy sailor - and the 254 pieces required to build the power boat and truck to transport it on.

All the usual Amazon delivery options apply and you could, if you really needed to, have it delivered to you by tomorrow but you'd need to order it before 7pm and it would cost you an extra £8.99 and you have to live on the UK mainland - I think I'll stick to the free SuperSaver option.

Thanks to ChunLi4444 at HUKD