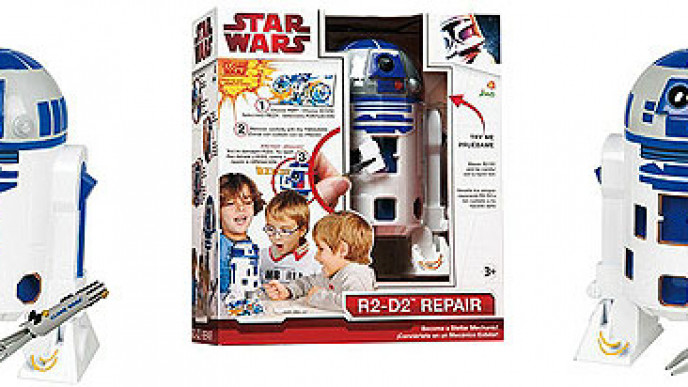 At almost 39 years old, is it wrong that I got rather excited when I saw this Star Wars R2D2 Repair game?  Think Operation, but for R2D2 instead and that's exactly what we've got here and all for £9.50 at Tesco.

I'm going through a bit of a personal Star Wars revival just now; my husband hasn't seen any of the Star Wars movies (I know, shocking!) and we borrowed the complete box set from a friend of ours only to realise, too late, that they were the Blu ray editions and not compatible with our DVD player *sigh*

So I begged and borrowed by set back from my youngest son (I gave them to him) and have been on a bit of a Star Wars feast ever since.

It's his sixth birthday in July and as a little fun something I think, as a responsible Star Wars parent, I should buy him this Star Wars R2D2 Repair game - we will need to remove R2's damaged parts, using the special galactic tweezers, and then put them back once they've been repaired, without setting the buzzer off.

The three AAA batteries needed are included and you can arrange to have your Star Wars R2D2 game delivered to your home for £3, OR you can collect him for free in-store at the Tesco of your choice.