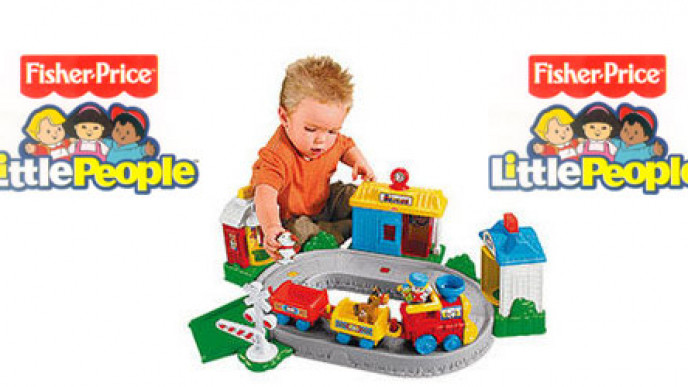 This is rather a good price as it's up for grabs on the Amazon Marketplace for £38 and £34ish with AyoBaby.

This Pop n Surprise Train is Fisher Price at it best, in my opinion; it has everything that little people adore - movement, sounds, music and surprises.

It's suitable for little ones aged between one and five years old, although I think they will have outgrown it before they get to be five; I can't see my youngest having played with anything like this for quite a while and he turns five in a couple of weeks.

But for those who are young enough to appreciate it, here's what the Fisher Price Pop n Surprise Train has in store for them...

When they push the train along sounds and music will play.

At each stop they can press, push or twist various things which produce different effects; opening doors will reveal passengers looking to go for a ride around the oval track.

In the box you'll get an engine, two attached cars and an oval track, the only thing you won't get are the required 3 AA batteries.

Delivery costs are just £1.99 and a word to the wise, most things for sale on the Argos eBay outlet sell out FAST! So if you want one, you'd better order it pronto.