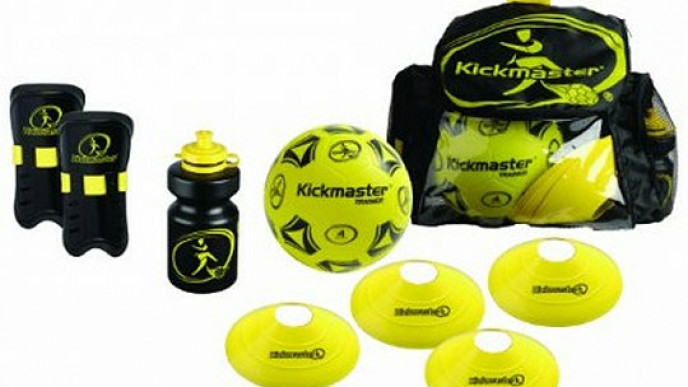 Duncan's Toy Chest (never heard of them before;  I had a boyfriend called Duncan once, but that's a whole other story!) are selling this rather nifty looking football training kit in a backpack for £10, rather than £14.99.

My youngest son has been going to football practice at the local football club, on Saturday mornings, for quite a while now and he was THRILLED beyond belief the other day to be told he'd been selected for the Under 7s team next season.

As you can imagine football training is now a very serious business, and now the summer has arrived (did you like how it seemed to rock up overnight!) lots of practice can be had at the little pocket park that's just a few paces away from home.

There are goal posts already there but sticks or tupperware tubs, stolen from the kitchen, are a bit naff as dribbling markers - so I'm going to buy him this football training kit backpack.  It's comes with four dribbling marker thingys (I have no idea what they're proper name is), a bright yellow Kickmaster football, a set of shin pads and a water bottle.

Delivery with Duncan's Toy Chest is free (hurrah!) so all you're going to pay for this football training kit is £10.