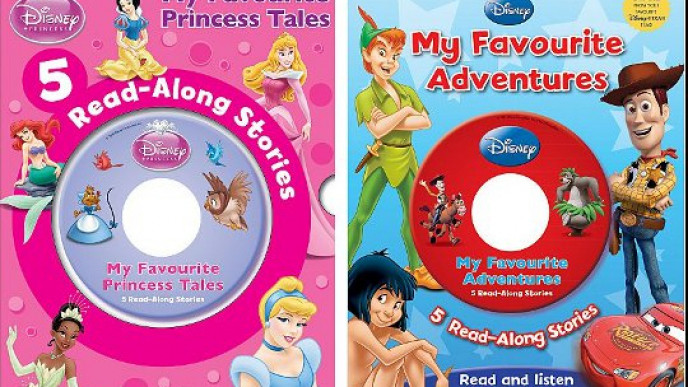 There are two Read – Along – Stories on sale at Debenhams. There’s the Disney Five Slipcase Adventure Tales and the Disney Princess Read-Along Tales, both of which have an RRP of £24.95 – although our every sharp HUKD members spotted them around Christmas for between £7 and £10. They’re for sale at £7.48, but with the code below you can get them for £5.98.

These are hardback books that come with a CD.  The Disney Princesses include stories about The Princess and the Frog, Cinderella, Sleeping Beauty, The Little Mermaid, and Snow White and the Seven Dwarves.

The Adventure Stories include tales from Toy Story 1, Cars 1, UP, Peter Pan and The Jungle Book.

The CD’s have a read-along story for each ‘book’ and features original movie sounds, character voices and music.

Apparently,  they aren’t highly illustrated, so are more suitable to older children who can actually read along, rather than just follow with the pictures. (Thanks for that bit of info, FunMum at HUKD).