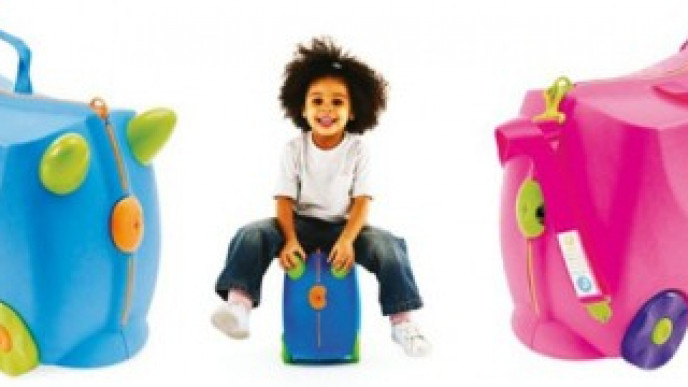 Mothercare have a price match promise where they'll match the price of items you find cheaper elsewhere; they'll also give you a £10 voucher too which, effectively, makes a Trixie or Terence Trunki £11.99.

Play.com are selling Terence Trunki and Trixie Trunki (the blue and pink ones) for £21.99.  Mothercare are selling them for £29.99 and will match the £21.99 as part of their price match promise, then they'll give you a £10 Mothercare voucher to spend as well - mash all those numbers together and you end up with an £11.99 Trunki.

You know about Trunkis now, right?

They're funky wheeled suitcases for kids which they can scoot on, or be pulled along on, if they get tired pulling it along.

Terence and Trixie Trunki conform to current hand luggage restrictions and on a recent trip to Heathrow were EVERYWHERE; lots of grown ups were eyeing them with envy - ohhhh to be able to scoot into Terminal 5 on an adult Trunki!

So, there you have it - with a quick phone call, a cheap Trunki can be yours courtesy of Play and Mothercare.