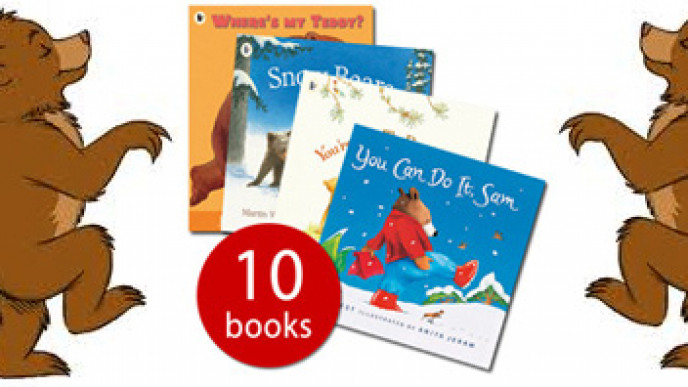 I suppose it's entirely possible that Charlie and Lola aren't your child's cup of tea, in which case the previous book deal won't be much good to you, so how about a collection of 10 Bear books for £9.99  from The Book People instead?

Most people call my youngest Bear, so he absolutely adores books that feature bears.

Bears have such universal appeal that this collection of 10 bear books will be suitable for boys and girls alike.

There are some you probably haven't read before along with the much-loved classic 'We're going on a bear hunt' by Michael Rosen & Helen Oxenbury...

"We're going on a bear hunt, we're going to catch a big one, what a beautiful day!"

Now if you've never read 'We're going on a bear hunt' then you absolutely MUST buy this book collection just for that one alone!

The other titles include:

* You're All My Favourites by Sam McBratney
* We're Going on a Bear Hunt by Michael Rosen & Helen Oxenbury
* Can't You Sleep, Little Bear? by Martin Waddell
* Snow Bears by Martin Waddell & Sarah Fox-Davies
* A Friend for Little Bear by Harry Horse
* The Bravest Ever Bear by Allan Ahlberg & Paul Howard
* Be Gentle! A Story About Playing Nicely by Virginia Miller
* You Can Do It, Sam by Amy Hest & Anita Jeram
* Hello, Goodbye by David Lloyd & Louise Voce
* Where's My Teddy? by Jez Alborough

Book collection like these make great presents or can be split up and used in party bags too.

Use code ZD533 to bag yourself free delivery when you get to the checkout.